Flyfish Club is the first restaurant in the world that can only be accessed by purchasing an NFT membership. The Flyfish Club is due to open in New York in early 2023. Regular membership costs 2.5 ethereum (more than 7.5 thousand dollars as of mid-March 2022), premium membership costs 4.25 (almost 13 thousand dollars), and existing tokens can be rented and resold on the secondary market, for example on the NFT marketplace Opensea.

NFT token holders will be granted access to temporary zones, an outdoor lounge, a cocktail bar and an open kitchen where guests can enjoy dishes made from fish coming straight from Japan. Also, Flyfish Club NFT owners are allowed to bring guests with them, but on condition that they have made sufficient reservations for their party.

Cotton candy has always been a popular seasonal weekend treat. However, in order to make decent money on it, entrepreneurs often have to launch an entire network for this . However, there are other ways to increase returns, such as selling glowing cotton candy.

The trick here is that, of course, it is not the cotton wool itself that glows, but the stick on which it rests. Equipped with LEDs, it shimmers with all the colors of the rainbow and conveys them to the sweetness itself. This simple trick attracts much more attention than the usual cotton candy of familiar colors. After the sweetness is eaten, the sticks can not be thrown away, but used as a toy. It is easy to buy LED sticks through Aliexpress.

Coshinhas are chicken croquettes, a very popular type of street food in Brazil, which can be a great alternative to the usual Russian nuggets. These croquettes are made from choux pastry and deep-fried, and garlic and cream cheese are used for the filling. In appearance, very pretty and mouth-watering pyramids are obtained, similar to vertical Kiev cutlets.

Pizza is the product that invariably pleases with business ideas and unusual product concepts . A lot has already been said and written by us about opening a pizzeria , and about the business of pizza machines , and about selling coca-pizza as street food. The aspirations of business in recent years have been to automate the preparation of this unique and beloved dish to the maximum, but at the same time not to deprive pizza of the most important thing – its taste. Now new candidates for success have taken on this task – the French startup Ekim.

The basis of the new automated pizza kiosk, developed by a pair of young French engineers, Sebastian Roverso and Cyrille Amon, is the pizzaiolo robot PAZZI. Its main advantage is that it can cook deliciously and quickly. It takes him about 30 seconds to cook a pizza. In addition to pizza, the shop also offers drinks and desserts.

In Russia, ban me burger is practically unknown, but in vain. Vietnamese sandwich or Vietnamese ban mi burger is an incredibly harmonious combination of crispy bread and juicy filling, which many pro chefs in the fast food world will envy. Ban mi in Vietnam is eaten by people of all classes, and because of this fast food, giants such as McDonald’s and KFC have not been able to gain the same popularity in this country as in other parts of the planet.

Ban mi is made in a crispy baguette, the love for which the French instilled in the Vietnamese back in colonial times. The inside of this very baguette can be anything. One of the most popular recipes is when the inside of a baguette is thickly spread with chicken pate, and then slices of baked or fried pork ham, thinly sliced ​​​​cabbage and spicy Vietnamese carrots marinated in a spicy dressing with ketchup and fish sauce are put into it.

31. Hungarian pizza instead of the usual

If you are looking for ideas for organizing fast food, pay attention to the Hungarian langos. Langosh is a fluffy yeast dough flatbread that is fried in boiling oil and is most often served with cheese and sour cream sauce with herbs and garlic. Langosh is also very popular in the Czech Republic, Romania, Slovakia, Serbia, Austria. In appearance, langosh can resemble pizza or a pie sprinkled with cheese, and have the shape of a circle or boat. Langos are sometimes referred to as Hungarian pizza or Hungarian flatbread. However, the matter is not limited to langos. If this is not your format, then here are more than two dozen options for unusual street food .

Blue Bottle Coffee Pop-Up was created by a cafe brand in Shibuya, Tokyo, as a new take on a classic post-Covid coffee shop. The coffee shop is completely contactless. The visitor places his order through a touch screen machine. Then the order becomes available in a special double-sided locker, where the corresponding cell lights up. This means that the order is ready for pickup. No face-to-face confrontation with the salesperson or barista – he and his work area are simply not visible due to the entire massive structure.

In some ways, such a cabinet resembles a capsule hotel , only the cells are not intended for people here, but for coffee. Designers also implied a beehive and honey shades. Such a trading system itself not only reduces the risk of transmission of infection and protects people from viruses, but is also a salvation for introverts who seek not to interact with anyone under any circumstances.

A serious impetus to the development of contactless technologies was given by the coronavirus pandemic. We’ve previously compiled some unusual examples of this , including contactless car buying, employee distancing systems, and more. Also a separate topic is the automation and robotization of modern coffee shops and restaurants, which has been actively going on for more than a year .

In China, thanks to a viral video from TikTok, McDonald’s exercise bikes have had a big effect on the population. Of course, the word “exercise bike” is difficult to call such a contraption. The seats here are lengthened so that each person can sit closer to the pedals, and the table is at chest level so that you can not tear yourself away from eating. At the same time, the idea that you can eat a hamburger with fries, wash them down with soda and burn at least some calories at the same time was a success. Moreover, when pedaling, electricity is generated to charge gadgets. Since McDonald’s may not return to Russia in the near future, owners of burgers and other fast food establishments, including vegan ones, can borrow a similar experience. 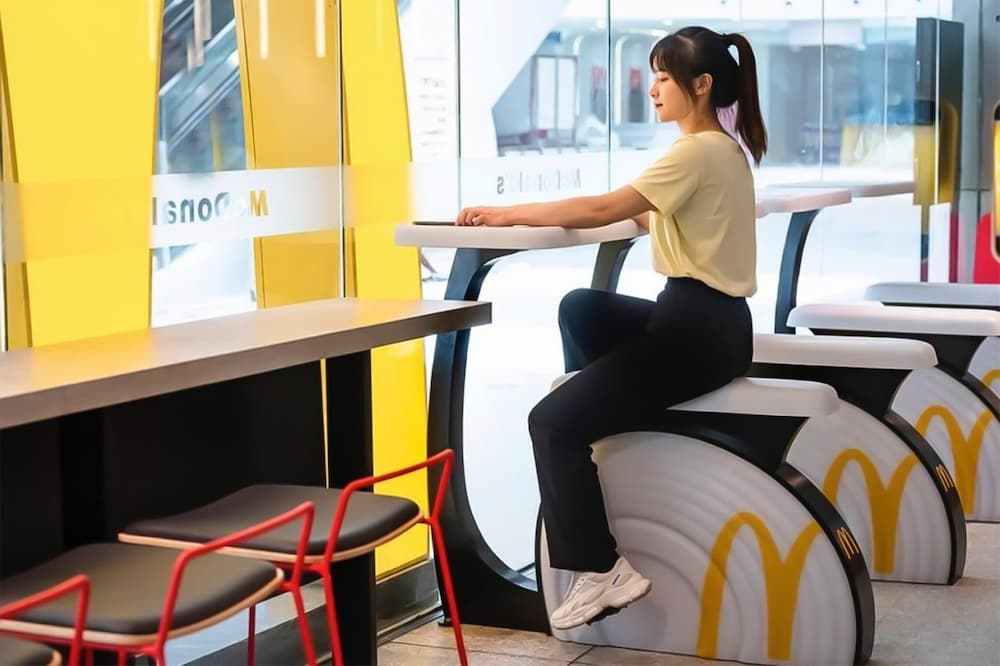 Fast food owners are used to the drive-through concept , but establishments offering healthy food in this format can hardly be found anywhere. But the small town of Schomburg in the US state of Illinois is likely to be an exception. In 2022, the Sweetgreen healthy food restaurant chain will launch its first sweetlane concept here – that is, the opportunity to purchase their products “off the wheel”.

It is reported that sweetlane will work for those customers who have previously made an online order through the sweetgreen digital platform. That is, not on the spot, but even before arriving at the store. In fact, it will turn out to be more of an issue point. The restaurant management says that they were prompted to introduce a new service by the fact that half of all revenue in the past, 2021, was received by the company through online orders.

Churros are a type of sweet fried choux pastry originally from Spain, where it is traditionally served for breakfast. Churros are thick and thin, and in shape – straight, uneven, spiral and in the form of rings. Naturally, such rather exotic pastries could not go unnoticed by entrepreneurs looking for street food trends . Indeed, in Russia, churros are still a rarity, and everyone loves to eat something new and relatively cheap.

The process of making churros is simple. For this, a semi-automatic churros extruder is used. The finished dough is placed from above into the barrel of the machine, then the handle is turned to squeeze the churros directly into the deep-frying oil. Ready-made churros can be sprinkled with cinnamon, powdered sugar, dipped in chocolate or jam, add toppings, or sprinkled with salt. You can buy a device for churros for only 10-15 thousand rubles.

Other profitable ideas for machines and machines for small businesses are in this collection .

If you have not yet decided on a business to start, you are attracted by several directions, but you don’t know which one suits you best, where you can realize yourself more and earn money, then the business game “I want this, I don’t know what” will help you choose a business . And not just to choose, but to create a ready-made concept of the future enterprise.

If you have already decided on a business or are an existing entrepreneur, but do not know how to increase income, average check, what else you can offer to existing customers, where / how to look for new customers, then we invite you to take part in the Collective Brainstorming. Participants not only improve their creative thinking skills, but also receive specific ideas in relation to the request with which they enter the brainstorming session.

Back to Top
Close